Herculean task for Zim as economy requires US$34bn for infrastructure

The African Development Bank (AfDB) has launched Zimbabwe Infrastructure Report 2019 which shows that Zimbabwe requires US$34 billion to upgrade its infrastructure. This was revealed in the flagship report by the regional lender which among other things serves to provide the government with a master plan for rehabilitation of infrastructure assets and recovery in infrastructure services within the context of Vision 2030. Zimbabwe aspires to be a middle income economy within 11 years.

The report also presents a game plan for reengagement with the international community; a platform from which a strategy for possible AfDB and other donor operations in Zimbabwe can be drawn up. Last but certainly not least this report was presented as part of the Joint Needs Assessment including costing of infrastructure sectors. The focus of this Report is on the services associated with transport, electric power, information and communication technologies (ICT), and water and sanitation in Zimbabwe.

Over the last 37 years, Zimbabwe’s economic performance has been mixed, as a result of policy lapses, targeted sanctions and adverse weather conditions that affected agricultural output. From 2000 and 2008, a sustained and broadbased decline in economic activities led to a cumulative decline of nearly 50% in real GDP growth. The crisis can be attributed largely to a combination of factors, including economic mismanagement, poor governance mainly arising from weaknesses in the rule of law in the context of the Government’s fast-tracked land reform programme, the concomitant loss of support from the international community, capital flight, and low investment. 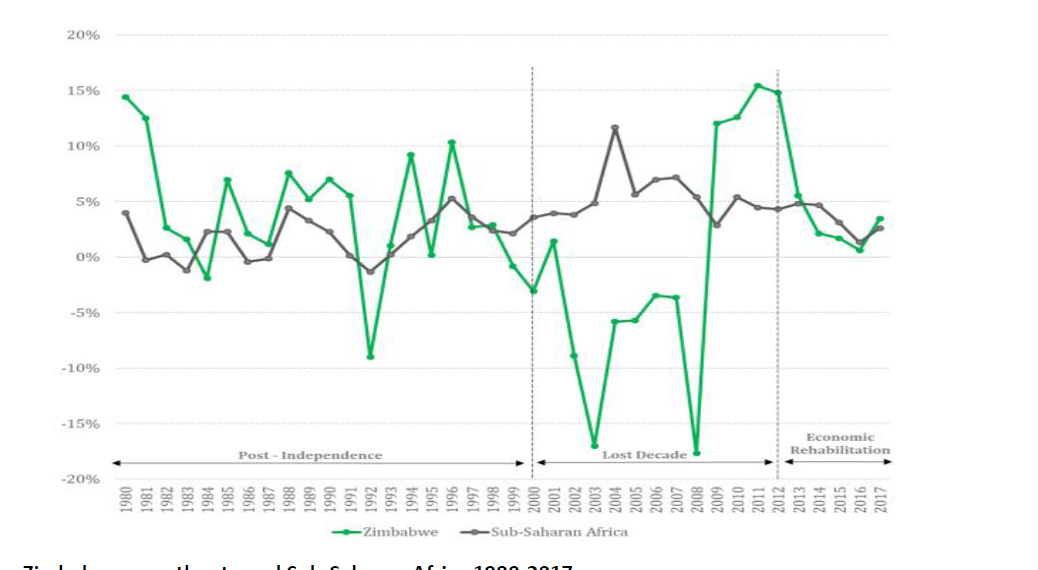 Official figures show that in 1980, Zimbabwe had the tenth highest gross national income (GNI) per capita in SSA at US$980 (current USD). SSA GNI per capita in 1980 was US$663. GNI per capita income fell sharply from about US$644 in 1990 to US$433 in 2006 and to an estimated US$338 in 2008. During the period 2000-08, which is now referred to as the “lost decade” Zimbabwe’s GDP contracted by 50 percent and this meltdown resulted in the deterioration of infrastructure. This deterioration across all major infrastructure services has also been attributed to poor maintenance and limited new investment in key infrastructure such as power and transport services. Poor infrastructure is a critical barrier to accelerating growth and poverty reduction in Africa. Studies have shown that increasing the stock of infrastructure by one percent can add up to one percent to gross domestic product. Infrastructure is considered a key component of the investment climate by reducing the costs of doing business and enabling people to access markets.

The total cost is put at about US$34 billion at 2017 constant prices, including US$8 billion of private investment in upgrade of existing infrastructure and new capacity. The water supply and sanitation and resource management would require an outlay of US$3.67 billion for capital works and related technical support. The power programme would require about US$1.14 billion, the transport sector requires approximately US$28.56 billion of which most is equired in the road subsector. The communications sector would require about US$412 million, primarily to the creation of a national fibre optic backbone network. Not included in these estimates is US$43 million for routine road maintenance.

The regional bank noted that while Zimbabwe has potential to grow in leaps in bounces in the short to medium term, a variety of threats such as failure to stick to the policy of fiscal consolidation, stability of the financial services sector, unfavourable investment climate and failure to access long term financing for critical infrastructure could stifle growth.
According to the AfDB, the political and economic crisis experienced in Zimbabwe in the past decade has also reduced the growth of ICT. Limited depth, the report reads of innovation has been shown to restrict growth and this can be particularly relevant in Zimbabwe’s case as the country school enrolment and literacy rates still remain high in comparison with other African countries. For economy saddled with a huge external debt which represents 40 percent of GDP, Zimbabwe’s prospects of raising US$34 appear dim. But the regional lender advised that a multi-pronged approach to finance such mega projects is the only way to get out this financing rut. The regional bank said the state enterprises involved with service provision in these sectors would account for US$1.5 billion of the total requirement of US$34 billion. Private sector would account for 23% at US$ 7.9 billion.

The national government and local authorities would account for a further US$20.7 billion, with donors providing the balance of about US$ 3.7 billion. Assuming an arrears clearance process is initiated in the near future, and full donor support is restored, the proposed infrastructure programme would require a majority of the bulk of the donor funds be allocated to water and roads. Currently, the AfDB is the Executing Agency for the Programme for Infrastructure Development in Africa (PIDA); the programme designed as successor to the NEPAD Medium to Long Term Strategic Framework (MLTSF), to develop a vision and strategic framework for the development of regional and continental infrastructure (Energy, Transport, Information and Communication Technologies (ICT) and Trans-boundary Water Resources). The PIDA initiative is being led by the African Union Commission (AUC), NEPAD Secretariat and the Bank. The Bank’s role as Executing Agency covers the responsibility for contractual, financial, technical and administrative management of the programme including  responsibility for procurement procedures, in conformity with its existing regulations, budget management and disbursements. Zimbabwe should step up its efforts in reengaging with the international community and multilateral and bilateral creditors to improve its prospects of getting funding for capital projects.