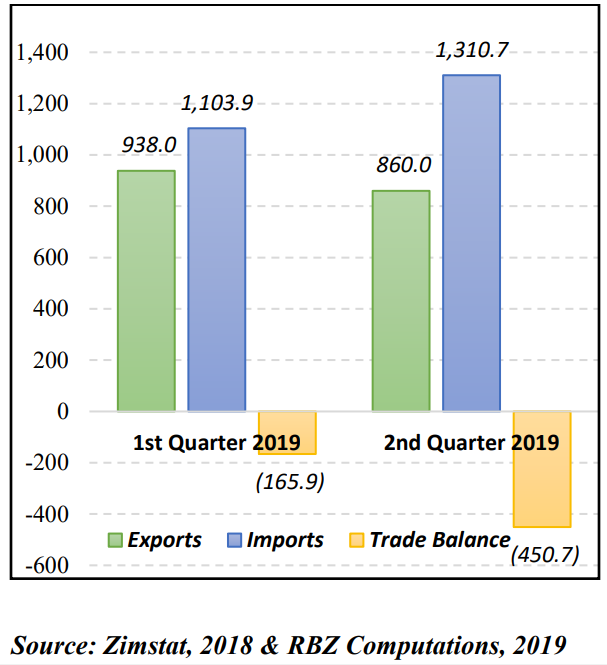 The Reserve Bank of Zimbabwe this week announced that exports for the quarter ending June dipped 8.3 percent to US$860 million while imports headed north. According to latest figures released by the central bank, the country’s trade balance widened from a deficit of US$165.9 million registered in Q1 to a deficit of US$450.7 million in the second quarter.

According to the central bank, the country’s import bill was mainly composed of diesel, unleaded petrol, crude soya bean oil, medicines, Jet A1, electricity, road tractors among others. Notably diesel and petrol imports constituted nearly 30.4 percent against a backdrop of crippling power cuts that have forced both domestic and industrial consumers to rely on alternative sources of energy.

For a net importer like Zimbabwe, this is not a good picture.  Government has already admitted that the economy will contract by up to 6.5 percent but we are of the view that it could shrink by 8.3 percent. The economy is now in hyperinflation and signs of macroeconomic stability appear remote. In fact government is now resorting to command economy pronouncements to regulate the markets and this has yielded desired results.

Retailers are now using forward pricing strategy where they look at replacement costs instead of current costs to maintain their stock levels and continue to trade, for now.

Gold production has been spiralling downwards as artisanal miners ditch state-owned Fidelity Refineries and Printers for side marketers offering hard currency. The central bank reduced forex retention for gold producers to 55 percent, a measure that gave birth to a flourishing parallel market.

The country’s gold deliveries dropped by 19 percent to 2.80 tonnes during the month of September from 3.47 tonnes during the same period last year, dashing any hope of meeting the annual target of 40 tonnes. As at September gold deliveries to Fidelity stood at 20.6 tonnes and the onset of the rainy season will slow down mining activity particularly for small scale producers who use rudimentary and risky methods to extract the precious metal.

The manufacturing sector on the other hand is operating below 50 percent capacity, implying that Zimbabwe is now relying on imports to meet domestic consumption.