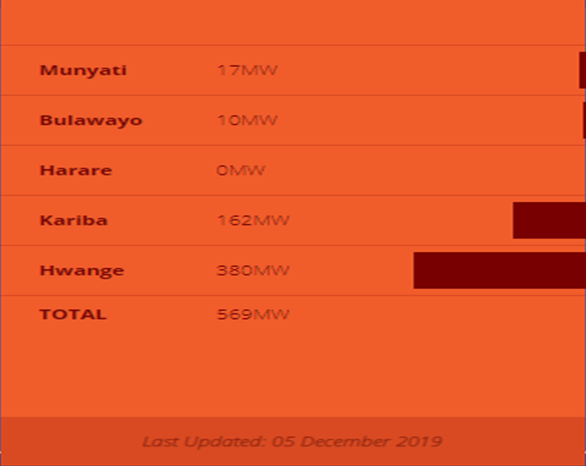 The Zimbabwe National Chamber of Commerce has launched its Energy Sector survey at a time the economy is going through turbulence.

Just when many thought the onset of the rains would improve generating capacity at the country’s largest hydro-powered station, its dark city again. The country’s power utility is supplying electricity for less than 6 hours every day. This has had serious socio-economic problems.

As Zimbabwe faces erratic fuel supplies, business has been left in limbo. In fact most of the companies interviewed said they had registered up to a 50 percent cut in output and in monetary terms firms could be losing up to ZWL$2.5m in potential revenues. For a country headed for recession this is shocking. The survey also came in as a profit warning for government as it revealed that most companies were this year expected to record losses or marginal profits.

Zimbabwe is battling high levels of unemployment and rising inflation among other economic challenges and the low business activity resulting from the power crisis could lead to more cuts as most companies will find it unviable to rely on alternative sources of energy.

President Emmerson Mnangagwa and other senior government officials are expected to grace this launch. But the question is “What’s next?” According to the African Development Bank, Zimbabwe requires nearly US$35 billion to fund its infrastructure projects including energy. For a country with a huge debt burden, attracting concessionary funding for such projects requires much more than rhetoric. It should go beyond the Zimbabwe is open for business mantra.

The energy sector requires huge capital and that capital can only be secured when Zimbabwe ticks a few boxes on its Doing Business rankings. The journey has just begun and the restoration and deepening of bilateral relations can improve the country’s prospects of securing concessionary funding or other viable funding models.

Public Private Partnerships and Build Operate Transfer arrangements are but some of the options that government can promote in its quest to improve generation capacity. Unlike major oil producing countries like Nigeria that can rely on the commodity to generate power, Zimbabwe needs cleaner and sustainable sources of energy that will help industry flourish.

It is our hope that President Mnangagwa who has distinguished himself as a listening president will adopt some of the recommendations made in the ZNCC survey to ensure that the economy can tick again.

In the absence of this, any hope of rebooting agriculture, manufacturing or mining will remain distant.