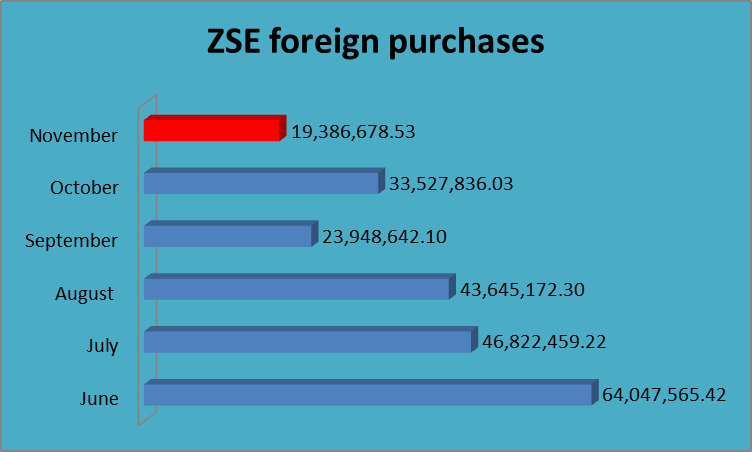 Zimbabwe economic woes continued to mount after foreign participation on the local bourse declined by 45 percent in November. Latest figures obtained from the Zimbabwe Stock Exchange (ZSE) show that foreign purchases dropped to $19 million in November from $34 million.

As the economy floundered blue chips on the ZSE have also taken a knock. PPC, National Foods and Delta Corporation have experienced one of their leanest periods after EBIDTA, revenues and volumes plunged in the period ending September. Delta for instance recorded a 48 percent decline in lager beer volumes during the half year period ending September from 1.04 million in prior comparative period.

The decline in sales speaks to low buying power or rather low consumer income that has been wiped out by rising inflation which is estimated to be hovering at 400 percent per annum.

At 175.66 percent, Zimbabwe’s annual inflation reached its peak in June, the highest in 10 years and keeps trending upwards.

The ZSE reflects on the performance of the economy and its current performance makes Zimbabwe an unattractive investment destination.

Just this week President Emmerson Mnangagwa told delegates attending the Zimbabwe National Chamber of Commerce Energy survey that local firms should push to export at least 20 percent of their volumes. On paper, this export oriented thrust could be a panacea to the foreign currency problems the economy is facing.

But a lot of housekeeping issues need to be addressed. For instance, Zimbabwe requires a permanent solution to the ongoing energy crisis. Secondly the country’s politics is just toxic. News that the ruling party wants to amend the Constitution to remove presidential terms send the wrong signals to both domestic and foreign investors. What Zanu PF needs now are policies and reforms that project the party as democratic and keen on reforms.

Anything short of this will affect the ongoing reengagement efforts with the international community and any prospects of turning around the economy.