Government appeared to have buckled to pressure when it announced that it was effecting a salary increment for restless civil servants soon. The lowest paid government employee will now receive $1023 but the Apex Council, a union representing civil servants is rejecting this offer.

The council argues that the offer does not meet the stated position of the workers which is pegged at $4750 for the least paid civil servants. Before the new proposed minimum salary the least paid government employee was paid $582.

Latest figures from the Zimbabwe Revenue Authority show that while revenues for the first half ending June exceeded target on both gross and net positions, going forward, maintaining this would be difficult given the current state of the manufacturing sector, mining and agriculture.

The recent issuance of Treasury Bills to fund undisclosed government programmes will not only mop out excess liquidity in the market but is gradually driving the stock of the domestic debt. This has had a double edged effect on the private sector which will be crowded out.

Zimbabwe faces deep macroeconomic imbalances following the introduction of the mono-currency which ended dollarisation which was introduced in 2009.

After adopting the multi-currency system which was mainly dominated by the United States dollar, fiscal deficits increased substantially during 2016-18, financed by the issuance of quasi-currency instruments nominally at par to the US dollar and the continued accumulation of external arrears.

A fragile equilibrium was maintained through exchange controls and other restrictions on access to foreign exchange, providing a deep distortion for economic activity.

By nearly doubling the minimum salary, government will be shooting itself in the foot. As we predicted in our analysis after the Mid Term Fiscal Review and Supplementary Budget, Treasury fiscal consolidation thrust will effectively go off the rails as domestic expenditure balloons. In the final analysis one can conclude that treasury’s fiscal surplus is not sustainable in the short to medium term.

It is just under three years after Zimbabwe had deflation, the economy may be sliding back to hyperinflation which will be driven by money supply growth and rising fuel prices.

On Monday the price of fuel hit the $10 mark per litre as it continues to track foreign exchange movements. While it is still below the US$1.40 per litre, the increases are already piling inflationary pressure on the economy.

The Finance minister has few options to quicken economic growth. Firstly he should consider incentivising low-hanging fruits like tourism which are all part of the real sector. Tourism players should enjoy relaxed exchange control measures to ensure that they can also re-invest into their business to maintain its attractiveness.

Is government’s appetite for TBs growing? 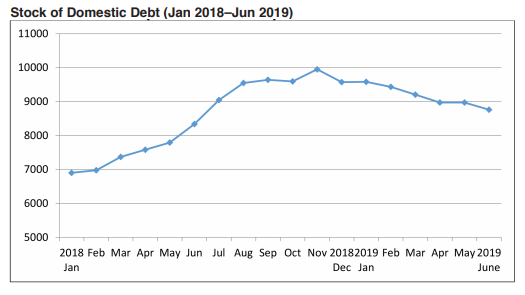 The Reserve Bank has announced that it is borrowing $60 million from the domestic market to finance its programmes in a third auction system which is market-oriented.

The auction comes after government abandoned the private placement system which has been in use over the years. It also reflects government’s growing appetite for the debt instrument.

Before that the apex bank borrowed $15 million and $30 million respectively. With interest at 50 percent, local financial institutions have taken a conservative lending approach and are now driving income through non-interest income and government paper such as Treasury Bills.

Offer for the 365-day $60 million Treasury Bills opened on Monday and closes on Thursday. Allotment and payment will be done on Thursday.

The commercial paper enjoys prescribed asset and liquid asset status, is tradable and enjoys tax exemption. It is acceptable as collateral for overnight accommodation by the central bank and allotment will be at weighted average rate.

Government could also be borrowing to mop up excess liquidity in the market while at the same time improving the process of price discovery.

However two issues make the issuance of Treasury Bills worrisome. Firstly, lack of full disclosures on what the debt instruments are being used for suffice to say “government programmes”.

Unlike Agricultural Marketing Authority bills in which government divulges purpose (e.g. buying grain) of the debt instrument, the government is not providing adequate disclosure on Treasury Bills.

For a government that has been hyping its exploits in fiscal consolidation, an excessive issuance of the debt instrument could choke government in the long term as domestic debt spirals out of control.

The timing of the debt instruments also comes against the backdrop of pressure from a restless civil service which is pushing for better wages.

Secondly, the issuance of the treasury bills will crowd out private sector lending at a time many companies are on their knees.

Government has also been borrowing from the central bank and breaching the prescribed central bank overdraft limit by several billions to fund its operations. Last year, the overdraft was ZWL$3 billion which was 55 percent of the previous year’s government revenue in violation of Section 11 (1) of the Reserve Bank Act (Chapter 22:15) which states that borrowing from the central bank should not exceed 20 percent of the previous year’s government revenues at any given point.